As manufacturing evolves, the focus on job training grows 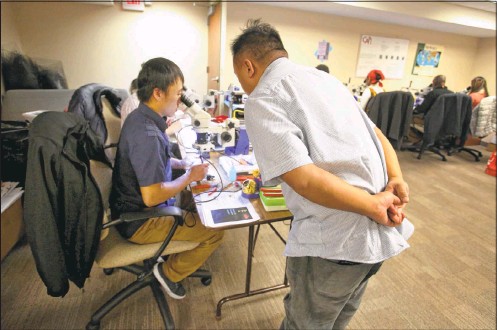 Century College instructor Tieng Vang counseled student Tou Vang while he worked on a circuit board at a CAPI USA course in Minneapolis.
Minnesota manufacturers face a tough hurdle. As baby boomers retire, demographers predict factory job vacancies will swell to 53,000 openings by 2024.

The dilemma means huge opportunities for job hunters, provided they know what manufacturing skills are in hot demand and where to get training.

The state’s economic development arm, educators, community groups and manufacturers are working together like never before to create on-the-job training and neighborhood-based classes in areas such as machining, circuit-board soldering, electrical assembly, welding and robotics.

EYES ON THE PRIZE:

Dawit Gelata observed a circuit board through a microscope while attending a two-month course through CAPI USA in Minneapolis to help him build skills desired by the manufacturing industry.

Four weeks ago at CAPI USA in Minneapolis, Tou Vang, 25, was finishing the two-month class that taught him to map and wire circuit boards using a microscope, soldering gun and blueprints. “This is hands-on training, and I love that,” said the father of three. “It’s awesome and a great opportunity for anybody who wants to pursue their manufacturing skills like me. I want to work for Honeywell.”

Vang, currently an Auto Zone sales clerk making $14 an hour, is following in the steps of his wife, Khou Xiong. She graduated from the same course with an industry IPC-J certificate in September. She attended CAPI’s career fair and was hired at General Dynamics at $19 an hour. Her last job paid $13.

In addition to grant-funded outfits like CAPI, some factories now offer manufacturing apprenticeships and more trade schools are customizing job-training programs for corporations.

“Employers, especially in manufacturing, are really having a hard time getting trained workers. So it’s really important to get the message out that there is training,” said Mary Nienaber, dean of continuing education for Century College. “There is so much work out there, and it’s good work,” often paying $20 to $35 an hour.

For a long time, plant managers rejected the idea of training their own workers. “The concept of offering apprenticeships is becoming very popular again,” Nienaber said. “It’s a way to increase the skill and wages of your incumbent workforce, and it’s a hiring funnel.”

Manufacturers report needing employees who understand math and measuring and who can program machinery, fix robots, work with 3-D computer models and electrical systems and make aerospace and medical components with strict tolerances.

That’s where Larry Raddatz steps in. He is Century College’s customized training director, who hires instructors to teach hands-on, hightech manufacturing classes in factories, community centers and colleges around the state. “Manufacturers are desperately seeking skilled workers. Many positions go unfilled for months, which is affecting their ability to meet customer needs,” Raddatz said.

Job training is seen as the solution. It’s often funded by grants or employers bent on providing small classes and short-term, hands-on instruction that ends with students receiving industry credentials that are instantly marketable.

“Students need to get a job as soon as possible, and employers can’t wait two years for them to complete an [associate’s] degree,” Raddatz said. “So we cram as much as we can into a short training period. After that, employers provide on-the-job training and support employees who want to obtain a two-year degree down the road.”

Government grants for several programs are expanding the pipeline of future manufacturing workers.

On Nov. 15, DEED awarded $8.1 million in job training and “equity” grants to 50 organizations. If successful, the training will lessen Minnesota’s searing racial-unemployment disparities and give minorities, women and veterans the very credentials coveted by factory heads, state officials said.

Century College is using its DEED grants to teach controlpanel assembly, mechanical maintenance and soldering around the state. Other recipients, such as Dunwoody College, Pine Technical College, Project For Pride in Living and the Hmong American Partnership (HAP) are using their grants to teach job seekers business math, “CNC” computer-controlled machining, welding, blue print reading and other skills.

Word spread across Minnesota’s Workforce Centers, Facebook and fliers posted in Sabathani’s food shelf and tax assistance offices. Its free classes began this summer and ended with participants getting jobs at Amazon in Shakopee and Menards lumberyards paying $16 to $22 an hour. “It’s very exciting for our community,” said Sabathani Executive Director Cindy Booker. “About 60 percent of our graduates are making more money after our program than before.”

Raddatz started soldering classes for Asian, Somali and other local residents at CAPI USA in Minneapolis and control box assembly classes at Neighborhood House on the West Side of St. Paul.

In May, Jayden Lee enrolled in Raddatz’s machinery repair “mechatronics” class at Neighborhood House and learned to fix listless machines; calibrate gears; wire and program machines, and about OSHA laws. The training was sponsored by Resource Inc., an agency that trains 800 a year so they can get better jobs.

Armed with his mechatronics credential, Lee snapped up a job at Missions Foods that he learned about at the program’s job fair. Resource job counselor Christine Law Chapman wasn’t surprised. After seeing his training, the Mission recruiter steered him from an entry-level job paying $13 an hour to a technician job starting at $18. Now Lee is eligible for further training inside Mission Foods and has full benefits.

“When he got the job, I was excited, as if I had gotten the job myself. It was just so awesome,” Law Chapman said. “Jayden came to our program underemployed but through his hard work he completed the training and now has this great opportunity. This couldn’t have come at a better time. He just became a new father.”

“It’s awesome and a great opportunity for anybody who wants to pursue their manufacturing skills like me.”

FacebookTwitterRedditLinkedInWhatsAppTumblrPinterestVkEmail
Page load link
We use cookies on our website to give you the most relevant experience by remembering your preferences and repeat visits. By clicking “Accept All”, you consent to the use of ALL the cookies. However, you may visit "Cookie Settings" to provide a controlled consent.
Cookie SettingsAccept All
Manage consent

This website uses cookies to improve your experience while you navigate through the website. Out of these, the cookies that are categorized as necessary are stored on your browser as they are essential for the working of basic functionalities of the website. We also use third-party cookies that help us analyze and understand how you use this website. These cookies will be stored in your browser only with your consent. You also have the option to opt-out of these cookies. But opting out of some of these cookies may affect your browsing experience.
Necessary Always Enabled
Necessary cookies are absolutely essential for the website to function properly. These cookies ensure basic functionalities and security features of the website, anonymously.
Functional
Functional cookies help to perform certain functionalities like sharing the content of the website on social media platforms, collect feedbacks, and other third-party features.
Performance
Performance cookies are used to understand and analyze the key performance indexes of the website which helps in delivering a better user experience for the visitors.
Analytics
Analytical cookies are used to understand how visitors interact with the website. These cookies help provide information on metrics the number of visitors, bounce rate, traffic source, etc.
Advertisement
Advertisement cookies are used to provide visitors with relevant ads and marketing campaigns. These cookies track visitors across websites and collect information to provide customized ads.
Others
Other uncategorized cookies are those that are being analyzed and have not been classified into a category as yet.
SAVE & ACCEPT
Go to Top